Investors Must Avoid These Levels To Cut Losses

Investors, who are keeping a close eye on Bitcoin Cash and want to avoid losses, should steer clear of these crucial price points.

As of this writing, Bitcoin is still showing a little bit of bullishness, despite losing a few digits from its price. BTC retreated below the $20K mark, and now trades at $19,998, according to data from Coingecko.

Short-term support for the bears came from rejection wicks at the $20.5k level. Even Bitcoin Cash, the fork of BTC, isn’t immune to this issue.

BCH is in such a jam, despite Bitcoin losing the $20k psychological support.

There have been recent reports regarding a number of developments with potentially profound implications for BCH. This report indicates that Bitcoin Cash’s transaction volume has been below the average of 27,734 daily transactions.

Lower transaction volumes are a negative indicator to both potential and existing investors for BCH, thus this could be an issue.

Bitcoin Cash’s value fell 35.50% between the July 29 rally and the September 19 low, before rebounding 17.40%. After that time, however, Bitcoin Cash’s price remains stable.

Although CCI and Stoch RSI readings are optimistic, the stated resistance level remains a formidable obstacle for BCH bulls to overcome.

Even though the Chaikin money flow index is optimistic, it is establishing a downward trajectory, indicating that the velocity of selling is increasing.

The CMF index’s gloomy prognosis, on the other hand, is more pronounced on the 4-hour time range.

The 4-hour CMF is -0.05, indicating that sellers are gaining control of the BCH market. Currently, the question is whether BCH can still recover.

The BCH support line stays unchanged. However, there are two levels of resistance that investors and traders should target: $125.912 and $138.835. 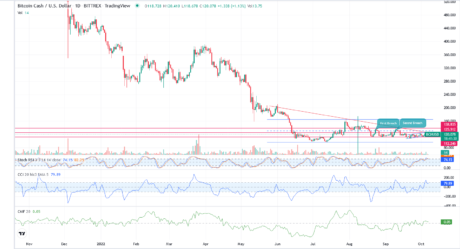 The former level was breached twice on August 23 and September 9, but the bulls were unable to sustain the break, resulting in a price decline to $112.246.

A breach of the $125.912 resistance can be interpreted as a psychological buy signal for investors. Since the fall on September 13, a modest uptrend is building on the 4-hour time period.

A strong closing in today’s trade could aid the bulls in maintaining momentum and finally surpassing the indicated resistance levels.